From the outset, I want to say that eating healthy food is a good thing. So is exercising and looking after yourself, and parts of the Pete Evans’ paleo program are doing exactly that. I applaud anyone who makes an effort to take care of themselves.

Go Paleo, before you all die!

We have all seen the wonderful “over to you” anecdotes that Pete uses to promote his 10 week program on his Facebook page. There have been stories of people losing weight and feeling healthier, miraculous recoveries from health conditions ranging from irritable bowel syndrome to bipolar disorder, people ditching medications for serious illnesses, and even running marathons, but something has been missing. Unless every. single. person. who embarks on the program has a wonderful turnaround in health, there are anecdotes that we aren’t seeing.

That’s ok though, because like the helpful soul that I am, I have been observing the paleo “tribe” and collecting them! The range of complaints I have witnessed in the closed paleo tribe group is listed below, and although this list is not exhaustive, I think I have gathered a good collection of the woes of the paleo tribe.  I would have shared these with you on Pete’s page, but sadly I asked a question he didn’t like on there one day and got myself banned.

Many of the ailments listed below were reported by several “tribesters”.

And this one. This experience of a child in honour of an ideology deserves highlighting: 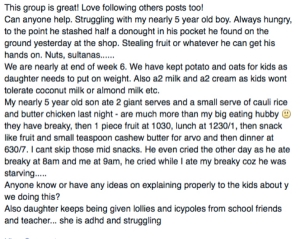 Child so hungry he steals food and cries because he is so hungry.

Not only are people complaining of the above ailments and giving each other all kinds of health advice on how to deal with them, there has been some outright scary health advice given in the group by “tribesters”. Like this one who advised the wife of a man with high blood pressure (175!) that it probably isn’t that high, and that a homeopath can help. I hate to think of the harm that years of untreated of high blood pressure has done to her own husband.

“Personally I question whether that is dangerously high. My husband is 67 and his BP is similar and has been for a few years now. The mainstream medicos want him on medication but he has been under a homoeopath for years who admits it is on the high side but not dangerous. My husband has avoided medications; he takes his blood pressure every morning and takes some homoeopathic remedies to keep it stable.”

Followed by other advice to try lavender. (not pictured)

Then along comes Alyx Lee, health expert (apparently) and chiropractor with health advice so far outside the scope of chiropractic, and a claim about chiropractic being proven to reduce blood pressure that is not supported by evidence. Why am I not surprised by a chiropractor giving rubbish advice on the Internet that has nothing to do with their own scope of practice? Perhaps a complaint should be filed with AHPRA.

Alyx: “CoQ10 , omega-3, hawthorn, vitamin C. ADDRESS STRESS FURTHER.Number one thing for an atypical high blood pressure patient. B Complex vitamins can help significantly with your body’s ability to COPE with stress EVEN if it’s mentally managed. Eating foods based on his blood type can also reduce stress on his system (whilst trying to advocate paleo). Check BP with your doctor first before doing anything!. Also, chiropractic care has been proven to reduce blood pressure. P.s I am a chiropractor and have experience behind my opinion.”

Anyway, I am pleased to say that some sensible people urged the woman to get her husband to a doctor ASAP, but examples like this show the dangers of unregistered and unregulated health gurus who shun evidence based medicine and lead their followers to believe that their way is the only way and the best for their health.

Looking a little closer at the paleo way of doing things raises alarms. The quick deletion of dissenting opinions on social media, the outright dismissal of criticism, while criticising actual trainned professionals is eerily familiar. Well, he did go to the same online ‘college of nutrition’ as Jessica Ainscough so they were bound to have come out with similar ideas and business models!

Paleo Pete goes out of his way to criticise food companies, the Dietician’s Association of Australia, The Heart Foundation and anyone else who either doesn’t agree with him, or criticises the restrictive paleo diet. It is often claimed that they are scared of losing money now that the “paleo tribe” is growing and shunning packaged foods for fresh alternatives. Its all about the money for them you see, not health. While poor persecuted Pete is just trying to improve the health of the world as a charitable act.

Oh wait… how many top selling paleo cookbooks does he have out now? Including the one that is so dangerous to babies that he had to self publish it electronically so people could buy it? Nah, I’m sure he doesn’t make a bucket of money selling books, surely not, because he just wants everyone to be healthy!

So, based on my guesstimates, its fair to say that Paleo Pete & co are making an absolute killing from The Paleo Way 10 Week Activation Program and the follow up program alone. In excess of $2 million dollars, so its in their best interests to dismiss anyone who criticises paleo to keep the punters on board. But lets not worry about any of this, because look! LOOK OVER THERE! Its another “over to you” success story!

What money? My motivations are pure.

Edited to add: Due to feedback received today I have removed the names from most of the screen captures, although anyone who expects privacy in a group of 16,000+ strangers with no screening process for entry is a bit naive in my opinion.

Disclaimer: I do not work in the food industry, not is my income or livelihood dependant on anything to do with food, diets or health products. I do not get paid to write, nor do I make money from this blog, it is my hobby. If every person on the planet went paleo tomorrow it would not impact me one bit, so tribesters – when you try to explain away this blog post as “vested interests” or “someone threatened by paleo”, think again, and try to come up with some more original claims for a person who criticises your way of life, because the usual ones don’t apply. (Not that they apply to most other people they are applied to either).