I’ve been quiet of late because, well, I have a life, but the anti-vaxxers are outdoing themselves again and instead of taking to Twitter with multiple tweets I thought I’d collate my thoughts here. That won’t take long, I’m apparently one of the ‘sheeple’ and we are said to let the media do our thinking for us but I’ll give it a crack.

This week the Victorian Health Minister Jill Hennessey hit back at the abuse she has received from anti-vaxxers, in newspaper stories and a video of her reading out messages they had sent her. Good on her, I admire her stance and strength on all things vaccination. Predictably, as they do when they have to look in the mirror at their own actions, the anti-vaxxers went into meltdown declaring themselves innocent, screeching “it wasn’t us” and “pro-vaxxers did this to discredit us” and demanding proof from the minister. One genius even observed that one message was 212 characters long and Twitter doesn’t facilitate messages of that length. Oh dear, someone please tell him that Twitter is only one means of electronic communication.

Then today, Anti-Vaccination Australia released a “press release” on their Facebook page again declaring their innocence. Of note is the location of which the release was posted; Perth, Western Australia.

“Recent Media releases by Jill Hennessy have been full of yet to be founded accusations against the Australian community that chooses not to follow the Vaccine Schedule, either in part or entirely.

Our community, which does indeed span the globe in terms of networking, is equally disgusted by the vulgar and abusive messages and tweets that Ms Hennessy has presented. To be clear, we do not condone nor promote such behaviour in any part of the community.”

The Anti-Vaccination Australia moderator who resides in Perth is Shawn Dhu. This Shawn Dhu:

I took a look in the cesspit that is the Anti-Vaccination Australia group, and it took me 30 seconds to find these two posts encouraging people to send emails to Minister Hennessey. The second one is one that was read out in the video Minister Hennessey made.

Again, I quote:
“tell the evil bitch it’s time she faced the music and the australian public will know for sure now that they are hiding something by banning Vaxxed and it won’t matter anyway because there are thousands of us spreading right now that they’re hiding proof that MMR causes autism. Go get her! Evil bitch.”

Then, of course, there is another moderator encouraging people to post on a page set up to attack  Minister Hennessey: 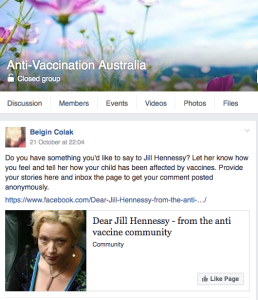 “Let her know how you feel.”

There is more, but to be honest I CBF.

The most glaring piece of hypocrisy here is Shawn Dhu claiming that he and those he associates with are innocent of abuse and asking the Health Minister to “engage in a civil, full and frank debate” with them. I will leave you with Mr Dhu and his associates’ idea of such engagement:

What is is with anti-vaxxers and their endless supply of foot bullets? I just spent my whole commute home from work laughing at the screen shots from my automatic capture software. Being the kind person that I am, I’ll share them with you. First up was an official-looking legal demand: 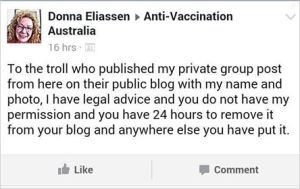 I’m sure she was acting on legal advice when she took to my facebook page as well. Here she makes unsupported claims, adds a couple of insults and thanks me for the “free publicity.” You’re welcome, I presume that means you are retracting the legal demand to remove the screen captures within 24 hours? Cheers. I’m a busy person and I don’t know if I could have gotten to it so quickly anyway. 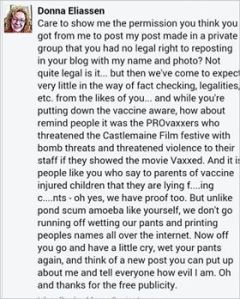 Thank you for the publicity.

Wanting to make sure I see her change of heart, she posts another legal notice in Anti-Vaccination Australia for me. 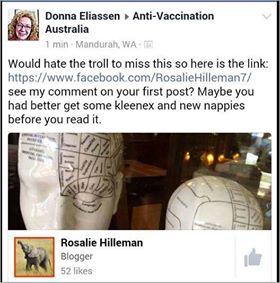 Curiously, someone by a different name then came along and posted an identical message on my Facebook page. I have no idea how that happened unless someone was playing in the sock drawer and got their socks mixed up!

I don’t know if someone who can’t get her socks on right should be throwing out childish insults like “wet your pants” but anti-vaxxers aren’t known for logic or intelligence I suppose.